Main Quote: "I'm maybe a Skunk, but I have a Heart of Gold"

Patricia the Skunk is a Happy Witch who looks Beautiful with her Big Skunk Tail & rides on her Flying Broom.

﻿She is one of the Sisters from the Witch Sisters with Selina, Abby, Laura, Jasmine, Michelle, Zoey, Bessy, Molly, Marsha, Victoria, Nina, Anna & Penelope

When she was 18, she was being attacked by 3 Crocodile Bandits, but later been saved by Jack the Hedgehog (Spongebob100) & they become Best Friends.

She was the New Leader of the Witch Sisters.

She was married to Anu the Anubis Warrior & have 2 Girls named, Patty & Keren

She is a very Kind & Sweet Girl who is Cute, Friendly, Lively, Energenic, Polite, Cheerful, Joyful, Playful & has a Heart of Gold.

She is sometimes Sassy, Cheeky & Flirty (in Rouge's Case), but she's mostly a Generous, trusting, caring & Honest Girl who always puts others before herself. She is also Brave & Out-Going like Sonic.

Like Sonic & Jack, she loves Excitment & Adventures with her Friends to stop Dr. Eggman & Dr. EggPlankton.

(Add your Characters here if your Patricia's Friend)

(Add your Characters here if your Patricia's Rival)

﻿(Add your characters here if your Patricia's Enemy)

She has a flying broom that looks like a Harley motorcycle & sounds like a motorcycle engine, she flies her broom, leaving thick black smoke behind her﻿﻿.

Her magical flying broom also has an engine.

She starts running faster than the Extreme Gears coating her tail with energy making an Iron Tail that'll smash up the opponent who are unlucky enough to stand in her way.

Her hoverboard is super fast & it's been kitten out to make it look good & very speedy for the race for female skunks like Patricia.

She appears in Amy Rose & the Looney Tunes. She first appears in "A hedgehog in need".

She first appeared in Episode 15

The Witch & the Fudd (Roleplay:The Fudd)

She appears with the Witch Sisters in Chapter 4

An Out of this World Game (Roleplay:Zathura)

Invited into the Party (Roleplay:The Way Past Cool Party(Free Join!))

He is one of the Characters who can help his Friends & he helps, Spongebob the Hedgehog & his Friends first

She is one of the Characters who can Sonic, Evo & the rest of the Gang to help resuce Kimiko from Scourge & Fiona Fox

She joined the Race with his Friends. She got 4th Place in Whale Lagoon. She got 3rd Place & Xplode wins the Race in Icicle Valley.

Stuck on an Island with Friends (Roleplay:The Islanders)

Turned into a Boy (Roleplay:Yet Another Gender Switch...)

Enter 25 Years into the Future (Roleplay:Enter Drakon the Halfbreed)

Back to the Past (Roleplay:Sonic Generations)

2 Dark Witches of Medieval (Roleplay:Sonic and the Black Knights)

Stepping through the Future (Roleplay:War of the Future)

The Skunk & the Ogre with the New Light Gaia (Roleplay:Ogre Unleashed)

She is one of the 5 Main Charaters that can help Jack defeat Ogre, Hades & Azazel. The Other 4 are Shock, Sonic, Tails & Amy.

The Mystery of CJ's Parents' Death (Roleplay:The begining of The End)

Saving everyone from a Forever Halloween (Roleplay:Halloween Night)

Patricia & the Angels (Roleplay:(Freejoin) Castle in the Sky)

She is a Plus One of Jack the Hedgehog for Freckles Jeeperchomp's Party, when everyone relieazes that Freckles is gone, Maxie makes Patricia go find the First-Aid Kit, but they both dissapeared. Then later reunited with everyone

She is the New Leader of the Witch Sisters

She is the Newest Member of Team Danger. Her Formation is Speed & Witch Expert 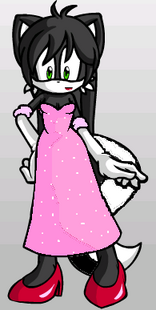 Patricia's Valentine Outfit
Add a photo to this gallery

Retrieved from "https://joshthehedgehog.fandom.com/wiki/Patricia_the_Skunk?oldid=21206"
Community content is available under CC-BY-SA unless otherwise noted.